How It All Got Started 025: Lina
Free serial fiction from author and creator Matthew Wayne Selznick.
3 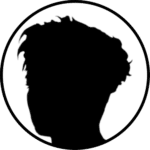 Lina saw Eric crouched by the stereo with Ian and Tammy. With jarring clarity, she realized she didn’t want to talk to him. A breath before she could look away, he raised his hand and motioned her to come over.

Lina turned to Carson. Just tell me to go with you, wherever you’re about to go, make a decision to take three steps away from the stereo, drag me with you, c’mon, Car…

Some loadie called to Car from the kitchen and Car turned in his direction. Lina touched his arm to get his attention back on her.

Car turned, but before she could grab hold of his sleeve, he gave her an apologetic grin and turned for the kitchen.

In the time it took for Car to slip out of reach, Lina decided she was acting like a little girl. Loadie-doofus was obviously some old buddy of Carson’s, and hell, she had called Eric on Wednesday specifically to make sure he’d here so they could straighten things out.

She went over to Eric, Ian and Tammy. Ian’s pupils were huge; he was already well on his way tonight. Tammy had a hand on his shoulder and a bored expression on her face. Eric stood up and offered Lina a hug.

She let him, but kept one arm at her side. Eric smelled like pomade, cigarettes and beer. When they broke their hug she put a finger under her nose to stifle a sneeze.

His sideburns and pompadour somehow made his concerned expression… what? Lina couldn’t find the word. “No… don’t worry about it.”

Tammy stood and helped Ian to his feet. Ian spoke carefully. “We are going outside.”

Eric put his hands on Ian’s shoulders. He smiled and mocked Ian’s attempt to not sound wasted. “All right, Ian. You go outside.”

Ian shook his head, grinning. He looked at Lina as Tammy guided him past. He giggled at her, and it was absolutely more of a laughing-at than laughing-with kind of thing.

Lina looked back to Eric, who had a beer in each hand. He offered one to her.

She took the bottle; it was already open and still cold. “Thanks.”

For Lina, this was a little too much like the trailer. Except, thankfully, they were in Preston VanHart’s living room, Carson was a few feet away being assaulted by good will from the doofus, and there were fifteen or twenty other people all over the house.

If she was going to talk to Eric, she needed this drink. So she drank.

“That was Wednesday.” He wagged his index finger at her. “You told me in the car—you remember, when I came and picked you up after you walked out on me—that you’d call me the next day. Which would have been Tuesday.” He took a swig, swallowed, and grinned, triumphant and… what else?

What was she seeing in him tonight she hadn’t seen before?

Eric was a dick.

Lina was a loser, dating a loser.

She grinned right back. “You didn’t seem to care when I called you on Wednesday. Why bring it up now?”

“Hell,” he laughed. “You barely kept me on the phone long enough to bring it up. You just made sure I was coming here, and then you were all excuses to get off the phone.” He shook his head. “Seriously, Lina.”

He laughed, short and ugly, and studied his beer. “Oh, I know. I could hear her in the background, making gagging noises like a ten year old.” He looked at Lina. “Like a bitch.”

Lina didn’t like looking at him. That was weird, because it was new. She took a long pull off the beer to hide it.

In fact, it was hitting her really hard. “Look, Eric…” She gritted her teeth; her throat felt tight and her equilibrium was going sideways. “Look, we need to talk.”

He went across the living room and toward the hallway with long, quick strides. “Hey!” Lina had to follow him. Her feet felt funny. She held on to the beer.

Eric opened the door at the end of the hall. “After you.”

Lina managed to slip past without touching him, but couldn’t avoid bumping hard against the door frame.

She should have had more to eat at dinner. She licked her lips; she was suddenly thirsty. A small sip wouldn’t do that much worse to her.

She was in the master bedroom; Preston’s mother’s room, probably. Car was in the next room. House full of people.

She sat down heavily on the edge of the bed and grabbed the spread with one hand to keep a wave of dizziness from fucking with her.

Crap, how did she get so drunk? One beer! Her ears roared.

“The talk.” He took a step toward her. “Or did you bring me in here to give me something else?”

She didn’t bring him in here! He made her… she followed..!

Lina opened her mouth, ready to give him hell. Just as soon as she could make her head work. Make her head make the letters make words out of sharp squeaky sticks she couldn’t put together. There they were…