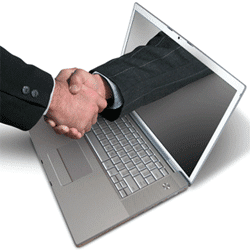 Now that I’m back in the freelance world as a creative services provider, I’ve re-joined a few user groups and forums dedicated to social networking, especially on professional sites like LinkedIn. I’ve been away for a couple of years, and I thought I’d see how the “space” was these days. I shouldn’t have been surprised to see that nothing’s really changed. People are still doing it wrong, calling themselves experts, and getting paid.

My irritation on this front has been growing for the last two months. Therefore, here comes a rant, conveniently delivered in easily-digestible, search-engine friendly blog post list format.

Three Great Ways To Kill The Social In Social Networking

When I follow back someone who decided to follow me on Twitter, I personally post a little message to all my other followers welcoming the new person. It goes like this: “Welcome new twitterpal @your_name_here!” I do this because it lets my modest audience of 1,700 or so see that someone new has joined the crowd, and it lets those followers potentially check out and maybe also follow the new person. In other words, when you come to the party, you get introduced around.

Unfortunately, more often than not, when someone acknowledges that I’ve followed them, I get a direct message — a note that only I can see — and it usually says something like this: “Thanks for following me! It’s great to meet you. Be sure to check out http://buy.myproductquick.ly!”

The insincerity, and impersonal nature, of the salutation is only exceeded by the level of audacity in the sales pitch… never mind the insult delivered when they have a robot respond to my personal gesture of connection. What’s worse is when they see my open, public acknowledgement of our new connection and finally get around to doing one of their own, making their initial automated direct message even more of a social misstep. You’ve been caught out, social media killer!

Imagine you have a bunch of friends over for dinner and, somehow, a perfect stranger ends up at the table as well. In the spirit of community and open-mindedness, you welcome them and give them a platform to present their opinion and tell you about themselves.

Then, the first thing out of their mouth is an impassioned invitation to you to exchange your attention, time and / or money for the “high definition sunglasses” they’re so desperate to unload.

How quickly would you show them the door? How much of your boot would be up their ass when you do?

That’s what it’s like when you post in an online forum specifically to pitch your website, product, or Clickbank three-page, fifty dollar “e-book” on how to sell three page e-books for fifty dollars. Not only will you and your post be shown the door with a decisive delete-and-ban, anyone who read your post will never, ever, ever trust anything you do or say online. Moreover, some folks are very efficient at spreading the word about this kind of bad behavior… and their social networks are much bigger than yours. You better believe it. Caught again, social media killer!

It’s no secret that the number of Facebook “Likes” on your brand or product page can be converted in some mystical, poorly defined and barely quantifiable fashion into real money. Since “Likes” are money, at least in the hipster sense of the word, we should all do everything we can to get that number up up up, right? And a quick way to do that is to get together in a big group and “Like” each other’s pages, right? Awesome!

I’ve seen this tactic suggested numerous times, and worse, I’ve seen dozens and dozens of people buy into it. I’m sure they have thousands and thousands of “Likes” on their Facebook pages. Unfortunately, it’s the social networking equivalent of photoshopping a giant crowd into images of that press conference you held in a rented conference room at the Holiday Inn — the one attended by your in-laws, co-workers and someone on the No One Cares Examiner beat.

Look: there is real value in “Likes.” You can learn the demographics of your audience and take that information to target and improve your product or service. In your “Like” audience you have a group of people who are already pre-disposed to support your endeavor, be it monetarily or through evangelism.

Which is why “Like” exchanges between Facebook page runners who otherwise don’t care about each other at all are monumentally stupid. What good is a bunch of “Likes” if they don’t represent real people truly interested in what you have to offer? By participating in quid pro quo “Like” exchanges, all you’re doing is muddying your data and diluting the value of your brand. This time, you’re not just a social media killer… you’re a social media suicide.

Anyone who spends eight hundred words moaning about the problem without presenting a solution is to be questioned. So here it is, the One Right Thing that will make you a master of social networking both on the Internet and in the Real World.

What does that mean?

If you don’t know — if you don’t really, truly know — then there’s no hope for you. Keep doing what you’ve been doing, and best of luck.

The rest of you — hello, nice to meet you. I look forward to engaging with you and getting to know you. Let’s start off the conversation… in the comments!