On “The Art of Asking” by Amanda Palmer

I don’t remember when musician Amanda Palmer first came to my attention, but I’ve known for years that our philosophies are very similar. In fact, until I became a patron of, and attended, her joint music and spoken word performance with author Neil Gaiman in 2011, I’d heard very little of her music. I knew and respected her solely from her online presence.

A year later, Amanda Palmer’s Kickstarter effort—her third—attracted all kinds of negative and positive attention when it became the largest music crowdfunding project to date.

In February of 2013, Amanda Palmer’s TED Talk, “The Art of Asking,” was released to the wider world. The talk, limited to twelve minutes or so, managed to wrap a message about music, neo-patronage, and the Internet economy around a characteristically personal and intimate autobiographical tale… and, in part, gave her an opportunity to counter some of the bad press she endured in the wake of her third Kickstarter and the subsequent tour.

That TED Talk speech, ultimately, made possible Amanda Palmer’s first traditionally published, mainstream book: The Art of Asking, or, How I Learned To Stop Worrying and Let People Help.

I have a strong positive bias when it comes to Amanda Palmer’s ethos. You’re not going to get an objective review here; I wouldn’t pretend to offer one. I loved this book.

Rather, this post is to explain why, if you’re a DIY, independent creator of any kind… indeed, an artist of any kind… you should probably read The Art of Asking.

A Literary Tone Poem On The DIY Ethic 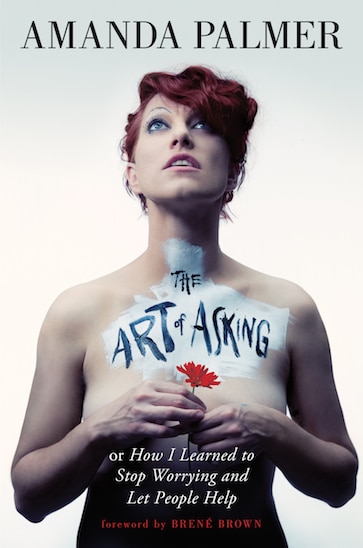 Like the best works of Gail Sher, Natalie Goldberg, or Philip Toshio, The Art of Asking is less a how-to book for creators, and more an object lesson on how one person has come to live a creative life.

Long before I knew there was an Amanda Palmer in the world, I’d been spreading the message that creators and consumers must consider themselves part of an interdependent, peer-to-peer community with the swirling blend of the creator’s works and the consumer’s experience at the center.

Through carefully chosen, sometimes painfully personal, anecdotes from her own life and the lives of her closest friends, mentors, and family, Amanda Palmer demonstrates how that community coalesces, sustains itself, and grows.

She’s walked the walk of the Conversation-Age creative community member, a beneficiary and sponsor of neopatronage, on a path that, while uniquely her own, speaks to what’s possible for the rest of us.

The “how to,” put succinctly?

Be vulnerable, trust, give back… and ask.

I read, probably on Facebook but I can’t be sure and I’m not going to dig around for it, that whether you love or hate Amanda Palmer, The Art of Asking will reinforce your opinion.

I don’t know about that. Personally… and I write this from as objective a stance as I can manage… I think that anyone capable of empathy will be moved reading this book.

About a third of the way through, I stopped keeping track of the passages that brought me to tears.

Each time, my reaction was in response to shared human truths about expression, love, trust, and hope. Nothing to do with being a DIY, independent creator.

Okay. That’s everything to do with being a creator.

This is perhaps the pervasive lesson of The Art of Asking: the willing, bold experience of, and raw expression of, these difficult emotions brings us closer to our capacity to create, and to the people interested in our creations, and to ourselves.

Whether you consider yourself a creator, or a consumer of creative experiences, or, like most humans, a shifting combination of both, you’ll likely find inspiration and comfort in The Art of Asking by Amanda Palmer. You should read it!

Have You Read The Art of Asking?

I’d love to hear your thoughts, good or bad, regarding The Art of Asking, whether you consider yourself a DIY, independent creator or not.

Did the book change how you think about your relationship with creators, or with the people who experience your own creations?

Let’s talk about it in the comments!