My Creativity Plan For 2015 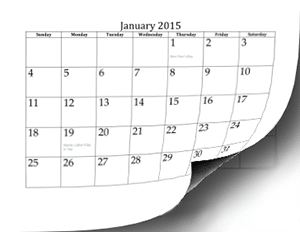 In a recent episode of The DIY Endeavors Podcast, I asked listeners to share their plan for 2015 in terms of creative success. I promised I would do the same before the year was out.

The time has come! In the interest of maximum distribution and transparency, I’m sharing that plan for 2015 both in episode 75 of the podcast and right here.

If you’re a DIY, independent creator of any kind, I hope you’ll be inspired to share your own plan for 2015 in the comments after you’ve read what follows!

Before I get into the specific plan, let’s lay out my goals.

My primary goal is one I’m sure I share with many, if not all, DIY independent creative professionals: be 100% directly or indirectly financially supported by my creative endeavors.

In practical terms, that means grossing $5,000.00 per month, month in and month out.

If that sounds like a lot of money, remember, self-employed folks like myself have to pay for their own health insurance and assorted taxes. Plus, I have all the bills and financial responsibilities of a guy in his late forties who’s carrying more than a little debt.

Anyway, it’s a shit-ton of money… but that’s what it’s going to take.

Let’s break down that primary goal into some smaller ones that, in aggregate, will help me hit the big number.

I’ll save the detailed look-back for the obligatory year-in-review post in early January (why do people do those before the year’s up..?), but I will mention that 2014 involved laying a lot of groundwork for the future.

In 2015, I’ll put a lot more energy in production. Specifically:

There are things I deliberately didn’t put on that list, despite hoping to get to them in 2015. Let’s see how far I get with the seven audiobook productions, two novels, a short story, a non-fiction book, assorted music projects, twenty six to fifty two serial installments, and fifty two podcast episodes!

2015 Is For Building Community

Clearly, one part of my plan for 2015 must be to grow my community of friends and fans.

If I’m going to reach the Big Goal of surviving entirely on income obtained directly or indirectly from my creative endeavors, I’m going to need a lot more people to either buy the stuff I make, become ongoing patrons, or both.

As a freelance creative services provider, I trade my time and expertise for a client’s money.

Especially time. Every hour spent on a client’s project brings me (about) $75.00… but that doesn’t count the unpaid time spent finding those clients, doing discovery, writing proposals, invoices, and so on.

It sure doesn’t count toward completing any of my own creative endeavors.

In fact, it’s accurate to say that my freelance creative services work is an impediment to reaching my own creative goals.

At the same time, my freelance creative services work is, at least for now, utterly necessary.

Without it? I’m on the street.

So, until I hit the $5K mark through some combination of sales and ongoing patronage, I need to not just continue freelancing… I need to find more freelance work.

The goal in 2015 will be to find more opportunities that provide more value to more clients… while taking less of my time. That means more consulting and more coaching; more upkeep, backup, and maintenance contracts. Fewer website development and “piecework” jobs.

One thing at which I’m really terrible? Allowing myself to rest, reset, and recharge. If you’re a DIY, independent creator who isn’t exactly making ends meet, you might have the same problem: the constant drive to find the next opportunity; the urge to milk every waking moment for potential.

One of my goals in 2015 is to allow myself at least one day off each week. By the end of 2015, I want to have two regular, consistent days off; probably Sunday and Monday.

I gotta tell you, that sounds like a pipe dream.

Still, it’s really important. I’ll be a better creator and a better freelancer if I just chill the hell out once a week.

Everything in this post to this point has defined what I want to achieve.

Now it’s time to look at the actions I’ll take to accomplish those goals.

So, regardless of freelance workload or other responsibilities, the plan for 2015 is to dedicate no less than one hour each weekday and five hours per week to my creative endeavors.

To be perfectly clear: that doesn’t mean I can do, y’know, three hours on a Monday, two on a Tuesday, and call it done for the week.

I’ve got to do one hour per day no matter what… and when I wake up Saturday morning, I had better have at least five hours of creative time behind me!

This might not seem like much, but the value is in the establishment of a habit and in the incremental, cumulative practice of my craft(s).

Creative time must be spent on stuff I’m eventually going to ship! Marketing (including the podcast and blog posts), website tinkering, and other supplemental stuff does not count!

It’s not enough for me to just set aside an hour (or more) five days a week and know I’ll be doing something creative in that time.

Without some specific direction, I risk squandering the time—or, at the very least, being terribly inefficient—by actually fretting over how to best spend it. Maybe you’ve got the same problem?

To combat indecision, misdirection, and lost time, I’ll dedicate each week in the month to a certain creative endeavor:

For my purposes, a week begins on Monday and ends on Friday.

The plan is to massively increase the size of, and my engagement with, my community of friends and fans.

To do that, I’ll be much more deliberate and thoughtful about how I reach out to new folks and, ultimately, inspire them to join my mailing list and / or become an ongoing patron:

I’ll launch new ways to connect and engage with my existing community so that I don’t just provide value, I provide value they want! To that end, somewhere around the first two weeks of January, 2015, I’ll survey my mailing list community to take their temperature in that regard.

Transparency As A Value-Add

One thing I know for sure: As I get into production mode in January, I’ll begin sharing in-progress drafts, background information, notes, and other stuff with my Patreon patrons. It’s important to me that my patrons—whether they pledge a dollar each month, or two hundred—get a unique, exclusive experience.

The life of a freelancer, it is said, is one of feast or famine. For me, truthfully, it’s one of barely-filling snacks or famine. That’s why the day when I’m completely supported by my creative endeavors and my patrons can’t come soon enough.

Until that day does come, I’ll continue to pursue freelance creative service opportunities, especially those that provide recurring revenue.

In January, I’ll add a Services section to my website featuring a number of a la carte and subscription-based items. Most will deal with helping other indie creators with their creative endeavors, especially in the area of WordPress-based website development and maintenance, which is a vertical that provides high value both for certain clients and for me.

I’ll also have offerings for DIY, independent writers, too, like coaching and mentoring.

A Plan To Rest

Yes, I have to plan my down time. I’ve discovered it’s necessary. If I don’t, I’ll work and tinker and chip away at stuff from nine or ten in the morning until eleven or twelve at night, seven days a week. That’s not good for me.

Beginning Sunday, January 4, I’m taking Sundays off. I’m going to do my best to not feel guilty about it!

Additionally, as I schedule projects both freelance and personal through the year, I’m adding margin: days before, after, and during when I’m allowing myself to rest. These times will be inviolable. I’ll make the dates public here on the site.

Speaking of making things public, I’m sharing this plan for 2015 with you for a number of reasons.

Everything I mean to do in 2015, and, more or less, how I mean to do it, is right here in this post (and in the accompanying podcast). It’s going to be a fixture in the Scribtotum archive sidebar all year long, too.

Considering that this plan (and all the related tasks) will also be in my daily planner, it’s in my face all the time. Hopefully, that will help me stick with it.

And if I don’t stick with the plan for 2015 for no good reason, there’ll be no hiding that fact.

Making this public is my way of keeping myself honest, and of bringing you, dear reader, into the circle of accountability. You’ve read this; you now have expectations.

Sharing this plan with you is also in line with my policy of transparency.

I’m asking my community of friends and fans to bring me $5,000 per month through purchases and patronage. In return, I will make things you will like.

Asking what I’m asking, how could I not be open and honest about the process?

And in the course of that process, I hope my experience helps other DIY, independent creators with their own.

Does this stuff have you excited?

Are you willing to help keep me on the path?

Will you be ready to purchase the things I make in 2015, or even become an ongoing patron?

If you’re a DIY, independent creator of any kind, has this inspired you to craft and reveal your own plan? Will you share it here?

Let’s talk about it in the comments!

This stuff won’t pay the bills, but they will help me out! Try my Practical List of things I always need, or my Couldn’t Hurt To Ask List if you have the means…
Surprise Me

Get New Articles In Your Inbox!

Fresh Scribtotum articles from Matthew Wayne Selznick delivered pipin' hot to your email as soon as they're published -- free!

Thanks! Watch your email inbox for a confirmation message!