First published on April 3, 2013 Join 10 commentators in the conversation
File Under: bookselling, publishing

I have an idea how an enterprising, book-loving entrepreneur can reinvent brick and mortar bookstores and revitalize the concept of the elusive “third place.” While I’m sure I’m not the first person to conceive of this idea in some form, today I was inspired to finally share it.

Why I Want To See Someone Reinvent Brick and Mortar Bookstores

I spent half my life working in media retail. More than half of that time, I was a bookseller. In particular, I worked at two bookstores that aimed to establish the bookstore as a viable Third Place: that anchor of community life separate and distinct from, but informed by, the workplace and the home.

Fahrenheit 451, the landmark Laguna Beach, California bookstore / coffeehouse P.D. James called her “perfect idea of a bookstore” and the only bookstore to carry that name with the blessing of Ray Bradbury himself, was the kind of place where movie stars, recording artists, tourists, and “townies” browsed and conversed side by side.

Through the years, each of Fahrenheit’s owners actively encouraged the idea of the store as a cultural focal point by supporting local craftspeople and artists and hosting seminars, author events, and local music.

Despite unwavering support from the community, the store’s twenty five year run did not survive the devastating damage of an employee’s embezzlement scheme, and they closed their doors for good in 1994. I worked there from the grand opening of their expanded location in 1991 for about a year or so — a short, but formative time.

Borders Books and Music, as it will always be known to me despite the many adjustments of its name over the years, was a “big box” chain one wouldn’t ordinarily think existing in the same context as a scrappy indie bookstore like Fahrenheit 451. However, Borders began as an indie just three years after Fahrenheit 451 first opened its doors, and carried a very local-centric attitude well into the 1990s.

When I joined the company in September of 1995, each store had a great deal of autonomy and a mandate to serve their local community that was reflected in the stock and an active commitment to local events, authors, music, and art. 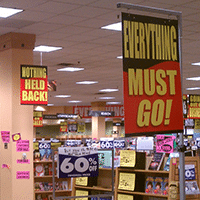 By the turn of the century, Borders Group, Inc. had bowed to stockholder pressure and became increasingly homogeneous, centralized, and faceless. Several missed opportunities and a revolving door of four CEOs in its last five years eventually brought the chain, once considered the envy of the industry, to liquidation.

I worked at Borders for ten years and one month. I held many positions, but the one I performed longer than any other was the best job in bookselling: trainer.

With the demise of Borders, all we’re really left with in the United States is Barnes and Noble… and for a very long time, their primary mission has been to sell memberships, not books, and a commitment to the establishment of a Third Place doesn’t seem to be on the minds of anyone in charge there.

Despite the ubiquity of Amazon.com and the easy, once-removed connection provided by online social networks, I think there’s still plenty of room for a brick and mortar bookstore that is also a Third Place.

Here’s how I see it.

How To Reinvent Brick and Mortar Bookstores

The key to realizing a viable reinvention of the bookstore and establishment of a Third Place is to swap the priorities. Rather than a bookstore where people can also drink coffee, eat dessert, and hang out for hours, approach it the other way.

Build a place where people are encouraged to eat and drink and hang out for hours… and buy any book that strikes their fancy.

“So, what,” I hear you say, “a ‘coffehouse / bookstore’ instead of a ‘bookstore / coffeehouse?’ That’s the big idea?”

I’m not talking about a coffeehouse model. Coffeehouses aren’t truly designed to be effective, encouraging Third Places. The seating is (intentionally) uncomfortable. The tables are small.

I’m talking about a floor plan designed to keep people there for hours… and get them talking with each other; engaging with one another.

Seating is a big part of this. Rather than small tables with uncomfortable chairs and big comfy chairs with inadequate tables (the standard coffeehouse arrangement), how about this:

One more thing about seating: at the reinvented bookstore, you don’t seat yourself. You’re seated according to the size of your party, your reason for being there, and the availability of seating. The host who knows their store and clientele very well (something that won’t take long at the hyper-local reinvented bookstore of the twenty-first century) will even seat people according to temper and tastes. It’s all about encouraging and even engineering community—a Third Place by design, driven by intent.

What About The Books?

Instead of a huge inventory of product constantly being churned by the wasteful, outdated twentieth century returns cycle, there will be very, very few books in the reinvented bookstore. A few cases of bestsellers, local interest titles, and works by local authors, plus perennial classics and whatever’s on the local schools’ required reading lists. A magazine rack, maybe. That’s it.

What’s to stop people from ordering books on their phones and tablets from Amazon or wherever? Not a thing… but prominent signage (and on-screen reminders when you log in to the wifi) encourages people to either use the in-store system or, if they must use Amazon or Barnes and Noble.com, to please use the store’s affiliate links.

The beauty of the affiliate link, of course, is that the customer might continue to make money for the store through Amazon purchases, even after they’ve gone home!

How To Reinvent the Brick and Mortar Bookstore Business Model

So… how does the reinvented bookstore make money?

Naturally, there’s money to be made in the sales of drinks and food (excellent markup!), sales of books and periodicals, and affiliate sales.

With nearly no returns and very few up-front orders of books and periodicals, the only investment in that area is in supplies and maintenance of the Espresso Book Machines and attendant technology.

And affiliate sales are, of course, pretty much entirely profit.

But the real money to be made lies in the value of the reinvented bookstore as an active, engaged, user-friendly Third Place.

Engagement As A Service Worth Paying For

How often have you been to a big-box bookstore for a book club, a Toastmasters meeting, a children’s story time, maybe a writer’s critique group, or to see a guy with an acoustic guitar? When you were there, how often did you spend any money in the bookstore? The attached Starbucks doesn’t count.

The reinvented bookstore of the twenty-first century will understand that a really great place to engage with the community is worth paying for. Not much, mind you, and it will always be free to just come in and hang out in the big common area… but if you’re there for a seminar, a singer-songwriter, a comedian, or you want to use a little room for your meetup, karaoke party, or what have you… you will be expected to pay.

Put a price on an event—even a buck to listen to the guitar guy do his sappy original music and seventies covers—and suddenly it’s an event, not just something happening, kinda half-assed, over in a corner.

The reinvented bookstore of the future puts a value on the educational, social, and entertainment to be found in the local community, and makes money from that commodity.

Can Your See It?

Does my vision for how to reinvent brick and mortar bookstores make sense to you? Can you see the place I’ve described? Would you hang out there, give it your custom, if such a place existed in your community? Would you make it your Third Place?

Explain why, in either case… and use small words, please. Share your thoughts on how to reinvent brick and mortar bookstores in the comments section, and please, do share this post with your social networks… let’s keep this idea on the fire until someone cooks something with it!