Among indie authors and those interested in self publishing, there’s a lot of discussion and debate about how to best build an audience. Without an audience, the thinking is, you simply don’t sell any books. Without an audience, conventional wisdom insists, you’ll never attract the interest of a traditional publisher, if that’s your goal.

People (try to) make careers teaching writers and other creators how to build an audience. Heck, I’ve taken a paycheck or two in return for relating my own experience in that regard.

What Is An Audience?

Consider the audience at a music concert at a big arena rock show.

The musicians have what just about any creator hopes for: thousands — tens of thousands — of people willing to trade money for the opportunity to experience their creative endeavor.

But the audience at a concert is separated from the musicians, often by great distance. Sometimes the audience is so far from the performers, they have to watch them on giant television screens… another wide gap, another degree of isolation between the consumer and the creator.

Sure, some brave, daring soul might make it through the barriers and security guards and crawl up on the stage, but what happens to them? They’re dragged away as quickly as possible.

Sure, once in a while the musicians might invite an audience member on stage for a moment. As special as those few minutes might be for the fan, it’s probably a one-time thing. The musicians probably wouldn’t recognize that fan if they ran into them on the street a week later. And the rest of the audience? A vicarious, “could have been me,” experience.

The audience receives what the creator chooses to deliver. The audience, more likely than not, knows the creator only through the lens of their creations.

If you’re trying to build an audience, you’re really only building something to broadcast to. You’re creating a body of recipients for your creative endeavors.

And those recipients? They will never truly know you, or what you’re trying to say with your art. They will never be as connected to you… as invested in you, your work, and whether you succeed or fail… as they could be.

What a waste. What a tragic, missed opportunity for indie authors… and creators of all types.

A Conversation Age Alternative To Building An Audience

The Information Age, Wikipedia tells us, is “characterized by the shift from traditional industry… to an economy based on the information computerization.” It was symbolized by the ease with which information was accessible to a much larger portion of humanity than ever before.

It wasn’t long — an eyeblink of history, really — before the same tools that enabled the Information Age ushered humanity into another period in our ever-more-rapid development: The Conversation Age.

What Is The Conversation Age 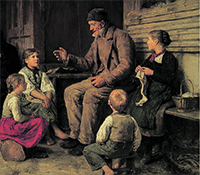 Step into the wayback machine with me as I meander through an explanation of the Conversation Age. It’ll all come around to why focusing on building an audience is stupid and why you shouldn’t do it; I promise.

We’re social primates whose earliest connected groups were at the family / clan level. The radius of our world was the distance we could walk in a day, except perhaps for semi-regular excursions to meet with other clans and trade goods, genetic material… and stories.

For most of human history, our traveling speed matched our communication speed. When a journey to another continent took months, human communication was still, essentially, a local thing, and slow.

The telegraph and telephone shortened the effective distance and increased the effective speed, but those communication methods were still restricted by resources. Remember per-minute long distance charges?

Now, though! A sizable portion of the human race is connected at the speed of light. With the click of a button, I can communicate in real time, face to face, with any number of people, on seven continents, at the same time. And the cost of that experience is so low as to be essentially free.

Now! We can, if we choose, define our family, our clan, our tribe, as the people who share our passions, our interests.

The village is everywhere at once, as close as thought.

We’re in two-way conversations, unrestrained by distance or time, with people whose connection to us enriches and adds value to our lives.

An anecdote: I saw the band U2 on the first leg of their tour supporting the album “The Unforgettable Fire.” During the show, Bono invited a guy on stage and handed him a guitar. The dude got to play with the biggest band in the world for four minutes, and it was undoubtedly awesome for him — seemingly, a moment of honest, real engagement, a conversation, of sorts, with people who were otherwise unreachable to that fan.

For the rest of us, it was apparently an electrifying moment of community.

Except that it wasn’t.

This was something the band did nearly every show that tour. It was a planned part of the evening. Bringing a fan onstage with the band wasn’t a spontaneous conversation. It wasn’t an organic expression of community. It was theater, a manufactured experience that degraded the core sentiment into something like a lottery.

Once you knew that, you were no longer part of a conversation with the band. You, and everyone else, was relegated to audience. Consumers, not community.

Another anecdote: When I worked at Mahalo.com in Santa Monica, California, it wasn’t uncommon for the CEO to bring actors, writers, entrepreneurs, and celebrities around to show them what we were doing and hang out with us for the day. I met Matthew Modine that way, and because he was just getting into Twitter, he invited us all to follow him, and he followed some of us back.

Let’s be clear: we’re not best buds or anything. But I appreciate how he uses Twitter as a tool to communicate, to express himself, and, perhaps because he recognizes his platform and ability to reach others, I give him props for promoting the tweets of others much more often than he promotes himself. Sure, there’s no correct way to use Twitter… but he is.

It was through Matthew Modine’s tweets that I learned of animator Ralph Bakshi’s Kickstarter project to make his first film in many years, “Last Days of Coney Island.”

Bakshi’s work was a formative influence on me: when I think of “The Lord of the Rings,” it’s images from his adaptation, not the books or the Peter Jackson films, that fill my head. And “American Pop” showed me the deep vein of lifeblood music carries through American history, and infused in me a strong desire to be part of that flow through my own creative endeavors. I pledged my support and promoted the project as often as I could without becoming a pain in the ass.

When “Last Days of Coney Island” Kickstarter campaign exceeded its goal, I felt a strong sense of pride. Community pride. Equally, I feel as though I’ve given back to Ralph Bakshi; a small, reciprocal act to thank him for his contribution to the richness in my life.

So? What should creators be doing, if not trying to build an audience?

Build A Community, Not An Audience

With thirteen hundred words behind us, the point should be obvious: Trying to build an audience is half-assed. It’s last century thinking unworthy of Conversation Age creators like ourselves.

If you want to succeed as an independent creator, you must build a community.

What Does It Mean To Build A Community?

It’s simple, really. But that doesn’t mean it will be easy for all of you. It requires a shift of perspective.

“Y’know, you get a kink in your neck looking up at people or looking down at people, but if you look right across your shoulder, you know, right at your peers… there’re no kinks.”

They’re your peers. They’re important — in fact, they’re essential. They deserve to be treated with respect.

They deserve your engagement as much as you desire theirs.

Here’s a fact: your creative endeavor — your book, your art, your movie, whatever — is utterly without worth until it’s experienced by someone else.

As creators, what we do is entirely a partnership with the people who experience our creations. Doing it yourself means never going it alone. These people: they’re your community, ready-made.

It doesn’t matter what tools you use. Blog, email list, Facebook page, Twitter account, forum, podcast… those are conduits. It’s what you put into it that matters, and what you accept from the people who want to know you.

But Matt, I Just Want To Write!

Great! You go ahead and write.

If you’re satisfied with simply having an audience… if you’re more comfortable staying on the stage and keeping your readers on the other side of the barricade… so be it. You might still have sales. Heck, you might have a lot of sales, especially if you pound out content in a genre full of folks interested in quick, disposable reads.

That’s great. If you’re satisfied with being a disposable author.

Your Community Is Waiting For you

Be open to them.

Let them know you need them.

Love them. As people. As individuals

You’ll know how to do it. Start with a conversation.

Your art should challenge you. Remember?

Will You Stop Trying To Build An Audience and Build Community Instead?

Indie authors, indie creators… will you start building community around your creative endeavors? Let us know how you’re going to do it… or ask this community if you need help.

Are you already building your community? Share your stories.

Do you think I’m asking too much; being too naive, or too idealistic? Let’s talk about it.

I’m looking forward to your comments. In fact, I need them, if this is to be a conversation. Let’s make it one.